Prefacing the Hindi Diwas widely celebrated throughout India, The Bhawanipur Education Society College organised a session on the same theme on 13th September, 2019 at Knowledge Resource Centre from 10:30 am onwards. The session started with a small yet motivating speech by Prof Dilip Shah, Dean of Student Affairs. 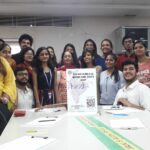 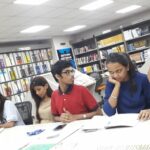 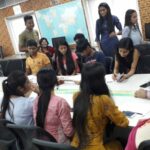 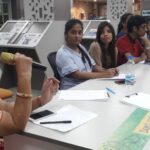 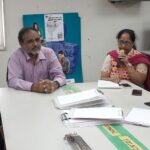 Dharmesh Dudheria, a first year student of B.Com Honours and Raksha Mishra, of B.A English Honours were the speakers who began the session by commemorating the importance of Hindi language. Hindi is the fourth most spoken language in the world after English, Spanish and Mandarin. Dharmesh started with a beautiful poem and thereafter precisely explained the idea of Hindi as an influential language. The Hindi language in India has a big history which belongs to the Indo-Aryan branch of the Indo-European language family. After being an independent country, the Government of India made a goal to standardize Hindi language with the grammar and orthography.

Devanagari script is used to bring uniformity in writing. It is spoken in many countries of the world including Mauritius, Pakistan, Surinam, Trinidad and some other countries.

Present there were Dr Vasundhara Mishra, Prof Minakshi Chaturvedi. A song was sung by Vasundhara Dalmia and students who reflected their opinion regarding the significance of the day were Anjali Dubey, Harshit and Mudit.

The celebration will initiate the enthusiasm among youths of the country about the Hindi language. It motivates and brings positive perceptions about Hindi among youths. So with a sweet note of acknowledging the language as one of the most important and the young generation should not forget the roots the session ended.