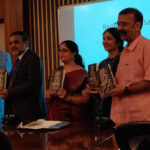 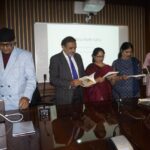 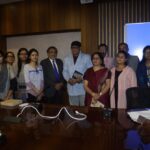 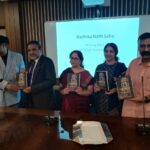 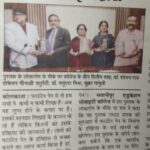 Dr Sovan Roy, talked at length about his passion for the fountain pen and regaled the audience with anecdotes that led him to stumble upon Dr Radhika Nath Saha  – the polymath and write about a forgotten chapter not only on the first Indian pen manufacturer in the organised sector, but also a rare tale of indomitable spirit, of entrepreneurship, of scientific discoveries.

Prasad Ranjan Roy welcomed the book as one of immense historical and academic interest and lauded the author for his dedicated efforts that has made it possible. As one who has written with a fountain pen all his life, he pointed out his obvious joy that such a book has been inked and hoped that Dr Roy, an acknowledged collector of India made fountain pens will share his subject expertise and record his knowledge about fountain pens for posterity.

Chandranath Chatterjee, who has extensively worked on the history of Kolkata and is a distinguished collector of writing implements and instruments also spoke on the occasion.

Prof Dilip Shah hailed the book as a landmark, putting on record his appreciation of the sheer amount of dedicated research work that the author has put in to shed light on a chapter of the Nation’s entrepreneurial and scientific ingenuity. He also highlighted the fact that the book will conclusively set at rest the question that has bugged many academicians and fountain pen aficionados alike “who made the first fountain pen in India?”

Prof Vasundhara Mishra, eminent poetess, regaled the audience with her composition dedicated to the fountain pen, which was penned specially for the occasion. Prof Minakshi Chaturvedi explained to the audience about the BESC initiative of helping students by reintroducing them to the charm of writing with a fountain pen, to embrace it as a sustainable alternative to the use-and-throw deluge of cheap plastic writing instruments. She underscored the need of using the fountain pen as a tool against the increasing digital influence which is robbing the young the ability to appreciate the finer nuances of life, sucking them into a depressive void. She stressed to the students in the audience the need to look at fountain pens as a stress buster, to resort to writing as a catharsis.

Dr Sovan Roy then then gave a talk about the history of fountain pen making in India. He pointed out the fact that book is the first one of its kind that unravels the mysteries of fountain pen manufacturing in India in the early 1900’s and introduces to the world, again for the first time, an Indian inventor of fountain pens who had at least fourteen patents from various Nations providing guarantees to at least twenty-two or more Indian inventions / innovations on fountain pens. He also shed light on the much-debated topic of the “Swadeshi Pen” and talked about how Radhika Nath Saha’s creation, the Luxmi Pen (Lokkhi Pen in Bengali) had reached the hands of the Father of the Nation, Mahatma Gandhi.

He underscored the point that Dr Radhika Nath Saha, the forgotten hero of Indian fountain pen has been rediscovered by the author and the book, he anticipated, will unveil a new chapter, hitherto forgotten, in Indian history of science and inventions apart from stoking the intellectual curiosity in many academicians who, he hoped, would take the work begun by him towards its logical end.

The event was organised by the Corporate Communication team of the BESC led by Darshana Shah. Maria Khan thanked the media persons for attending the event.

(This report has been filed by Darshana Shah along with camera person Gitanjali Chatterjee of the Expressions Collective of the BESC. The event was coordinated by Maria Khan.)