The Department of Journalism and Mass Communication was established in The Bhawanipur Education Society College in the year 2014 with the subject being initially offered as a General Elective to the students. From 2016, the Department started offering Honours course to the aspiring students. To commemorate the completion of five years of its establishment, the Department organized a series of student-centric events on October 01, 2019. The entire programme was titled “Journesis”.

The celebrations were aimed at encouraging the young minds to explore their creative talent beyond the routine academic curriculum. The events for the day included photo feature, switch, picture puzzle, news presentation, ad-copy making, logo quiz, skit, stand-up comedy and dumb charades. Except for news presentation and dumb charades which were reserved only for the students for Journalism and Mass Communication, all the events were open to all the college students. The Department also organized an exhibition of different communication models on the occasion. Besides, handmade posters for all the events made by the first semester students of the Department of Journalism and Mass Communication were also placed on display during the programme. 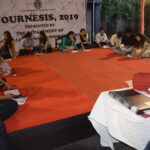 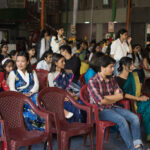 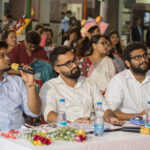 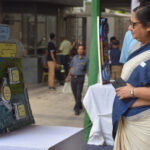 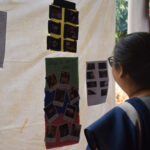 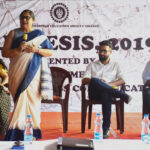 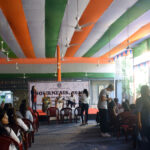 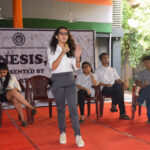 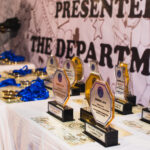 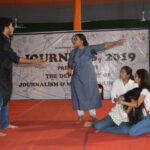 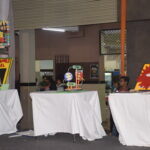 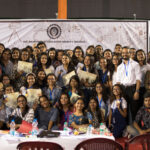 The program began with the inaugural session. On behalf of the college, Dr.SuchandraChakravarty (Teacher-In-Charge, BESC) and Ms.DebjaniGanguly (Vice-Principal, Arts) felicitated the judges for the programme, Mr.SayanSarkhel (Assistant Manager, NSHM Centre of Creative & Performing Arts, Aangan) and Mr.SubhrajeetGanguly (Assistant Professor, Dept. of Media Science, The Heritage Academy). In her speech, Dr.SuchandraChakravartycongratulated the department for its successful journey so far and expressed hope that the department will continue to bring more laurels for the college in the days ahead. She also applauded the department on being the first arts department of the college to have organized an open-air programme on the college turf.

The first event for the day was ‘switch’. Each participant was given a particular topic on-spot by the judges and they had to switch between speaking “for” and “against” the given topic numerous times on the call of the judges. Marks were awarded for fluency and relevance of subject presentation. The following students emerged as the winners for the switch competition:

The third event was ‘news presentation’ competition. Each team had to make a news reel on current news topics. Two teams from the Department of Journalism and Mass Communication participated in the event. The following teams emerged as the winners for the news presentation competition:

The next event, ‘ad-copy making’, was also a team event. Each team was given a product name on which they had to make a hand-made ad-copy with proper tagline/slogan within one hour and explain the same to the judges. Total seven teams participated in the event. The following teams emerged as the winners for the ad-copy making competition:

The next event was ‘logo quiz’ competition. Each team, consisting of two members, was given a set of five logos. One member had to identify the logos while the other had to create new logos for the given logos. The following teams emerged as the winners for the logo quizcompetition:

In the post-lunch session, skit, stand-up comedy and dumb charades were held. The following team emerged as the winner in skit competition:

In stand-up comedy, the following students emerged as winners:

The last event for the day was ‘dumb charades’. Five teams from the Department of Journalism and Mass Communication participated in the event. The following teams emerged as the winners in dumb charades:

Besides, the Department had also invited entries for a ‘photo-feature’ competition. A total number of ten entries were received for the same. The following students were adjudicated the winners for the photo-feature competition by the judges.

The programme concluded with the prize-giving and valedictory ceremony. Ms.ManaliSaha, a former faculty member of the department shared her memories of the department and hoped that the department would organize more such events in the future. The Vote of Thanks was given by Ms.Shaswati Das, Department Coordinator, Department of Journalism and Mass Communication, BESC.