17th February, 2020, Placement Hall: The Bhawanipur Education Society College (BESC) hosted an auction ahead of its upcoming MUN conference, the Intra Assembly of Nation Conference, which goes by the name Intra AON. This is the intra college edition of the mega conference The Assembly of Nations. Mr. Ashish Ranjan, an alumnus of the college and popular figure in the MUN circuit, having sheer amount of expertise in the field of MUN’s was the guest auctioneer. Around 40 students across several departments filled up the placement hall to witness the event.

A total of 14 people selected based on their experiences in MUN conferences participated in the auction, and the bet being placed by the student ambassadors who hailed from every odd streams of the college. Each of the student ambassadors was allotted with Rs. 200 to bid on the fourteen people, who were put to auction. During the auction, attendees shared their opinions, their thoughts and their expectations on the participants. The base price of the auction was fixed at Rs. 25. The idea of this interesting event was to help participants as well as the audience to witness a glimpse of the auction. These participants were given companies. Ultimately, after rounds of extensive auction, the highest bid went up to Rs. 130. 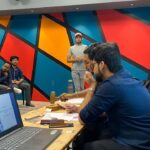 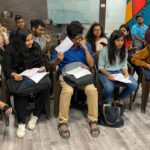 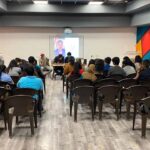 The auction saw over enthusiastic response from the students as some event of this magnitude has never been conducted before. It was a great event, students exercised their liberty and choice to place the bid on the participants. Therefore, the event provided a great learning experience to the participants as well as the audience.