The Departments of English and History, The Bhawanipur Education Society College, in collaboration with the Department of English, University of Calcutta, presented a two-day International Seminar on  “Revisiting the World Wars: Historical and Cultural Representations” on the 16th & 17th December, 2014. The topic commemorates the centenary of the First World War, and takes this as an opportunity to reflect upon the impact of the two World Wars on the history of human civilization and human lives, with special reference to the historical and literary representations of the same. Interdisciplinary in approach, the focus of this seminar was to explore the various facets of the two World Wars and their impact on South Asia in particular.

On December 16, the seminar was inaugurated by Professor Malabika Sarkar, former Vice Chancellor, Presidency University at 10-30 am. The keynote address was delivered by Dr, Santanu Das, King’s College London at 11-15 am. The session was chaired by Dr. Santanu Majumdar of the University of Calcutta, Department of English. Dr. Das, a renowned scholar on War poetry spoke at length on the experience of the Indian Sepoy in the War. His presentation titled ‘The Sepoy Heart: Image, Music, Text’ featured images of the Indian Sepoys in War and also the indigenous war songs composed on the occasion. In the second session Dr. Argha Banerjee provided a new perspective on War, focusing on the reflections of environmental issues about land and the threats posed to pastoral life in World War Poetry. The session was chaired by Prof. Tirtha Prasad Mukhopadhyay from the Department of English, University of Calcutta. In the post lunch session chaired by Prof. Ujjal Kumar Majumdar, a retired faculty of the Department of Bengali, University of Calcutta, another eminent speaker, Professor Sanjay Mukhopadhyay of the Jadavpur University, Department of Film Studies gave an eloquent presentation on the Second World War Documentary film ‘Night and Fog’ by Alain Resnais. The presentation highlighted rarely featured archival details from the Nazi Concentration Camps. The next session, chaired by Prof. Sinjini Bandpophyay of the Department of English, University of Calcutta consisted of presentations by four speakers from reputed institutions who spoke at length about the representation of war in art and media. The session was concluded by a presentation on women and war by the students of the Bhawanipur Education Society College.

On December 17, the second day of the Seminar, Dr. Kaushik Roy of the Department of History, Jadavpur University presented a detailed account of Non Combatant autobiographies of Indians in the First and Second World Wars. The session was chaired by Prof. Ranjit Sen of the University of Calcutta. This was followed by an interdisciplinary panel discussion at 11-30 that included General Shankar Roy Chowdhury, Indian Army (Retd.), Professor Rajat Kanta Ray, Professor Emeritus, Department of History, Presidency University, Sri Devdan Mitra, Resident Editor, The Telegraph and Professor Shahnaz Nabi, Department of Urdu, University of Calcutta. The discussions ranged from diplomatic war strategies to intimate accounts of the Indian Soldier’s experience in the Second World War, the civilians’ responses to war and the question of media and the propaganda war. In the post lunch session that consisted of paper presentations by scholars and professors of reputed institutions the audience were introduced to diverse perspectives on the war including interdisciplinary approaches to war, role of the media, representation of war in literature, art, films and popular media. The valedictory session was conducted by Dr. Suchandra Chakravarty, Vice Principal of the Bhawanipur Education Society College, followed by the distribution of certificates. 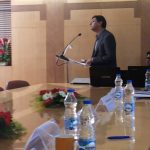 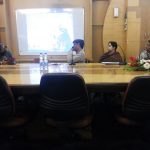 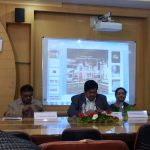 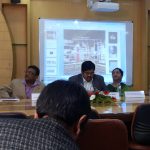 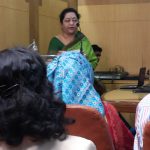 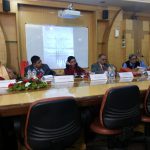