The Department of English, The Bhawanipur Education Society College inaugurated a year-long seminar series titled Re-thinking Romanticism on 19th March 2019. The inaugural seminar was organised in collaboration with Indo British Scholars’ Association (IBSA) Kolkata. The aim of the inaugural seminar was to focus on new approaches to the study of Romanticism, which, in Indian Universities, is often dogged by traditional approaches at the expense of more cutting edge research that is being carried out in other parts of the world. 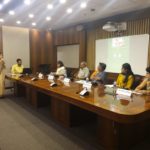 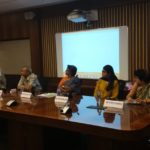 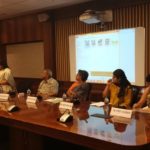 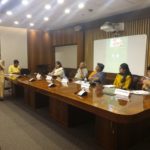 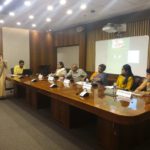 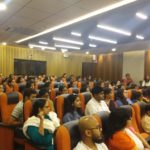 Dr.SuchandraChakravarty’s inaugural note dwelt on the widely-read approaches of M.H. Abrams and Harold Bloom, followed by the destabilising effect of Paul de Man’s The Rhetoric of Romanticism and Allegories of Reading, before moving on to the New Historicist readings of Jerome McGann and thereafter. Dr.Chakravarty concluded her note with comments on broad relevance of Romanticism and how even centuries after Wordsworth and Shelley, it remains a popular, widely-researched and researchable subject, particularly from our eastern perspective, as the Romantic Age is also the age of colonial expansion and east-west interchanges.

Prof.Chidananda Bhattacharya’s speech, that he referred to as a ‘mad monologue’ , began with the ideal definition of Romanticism and attempted to trace hints of Romanticism in the works of Shakespeare, his delineations and vignettes. He mentioned how Romanticism is not monolithic but an ever-percolating discourse leading to the emergence of the five major Romantic poets. These poets intended to create a platform where they could take an issue and connect it to reality, thereby manifesting the difference between fancy and imagination. Prof. Bhattacharya then proceeded to show how even the Postmodernists were Romantics as they broadened the horizon like the compositions of Judith Wright.

Dr. Nishi Pulugurtha’s paper was about the legacy of British Romanticism in English poems written by Indian poets in the 19th Century Bengal. Dr. Pulugurtha discussed how some of the works composed during the times that witnessed the Young Bengal Movement, Radhakanta Deb’s opposition to widow-remarriage, the introduction of English as the administrative language and the frequent stage presentation of Shakespearean plays, contain resonances of British Romantic Among the significant works discussed were KashiprasadGhose’ Shayar and other poems, Toru Dutt’sAncient Ballads and Legends of Hindustan, Derozio’s “Fakir of Janghira” and others. All heavily ornamented they almost imitated Wordsworth. While “Fakir of Jhangir” was thematically dealing with ‘Sati’ and the association of a Hindu girl and a Muslim fakir- concepts intrinsically Indian, structurally it resembled a metrical romance, “A Farewell to Romance” by GovinChunderDutt reflected strong influence of Sir Walter Scott.

In the second session of the day, Ms. Neetisha Jha’s paper focused on John Clare, his life and his art with respect to Wordsworth. Ms. Jha argued how Wordsworth’s idea of a peasant poet ‘rejoicing in the spirit of life’ was epitomised in the image of Clare as a human and a poet. She proceeded to show how it is reflected in his poems as she quoted extensively from “The Setting Sun”, “The Harvest Morning”, “Recollections after an Evening Walk” that capture the rural England and the rustic beauty of Nature. Ms. Jha also focused on the simplified language of Clare’s poetry that emphasised more on the rural life, very similar to that of Wordsworth. Clare’s poems depict the inseparable identities of the poet and the man, Harold Bloom therefore probably rightly calls him “Wordsworthian shadow in a visionary company”. Ms. Jha concluded by narrating John Clare’s “Memory”.

Dr.Sumita Banerjee was the last speaker of the seminar and her paper focused on Clare’s apparently weird obsession with creatures or the ‘ecomystical communion’. Dr. Banerjee argued how his creatures were actually a representation of his own psyche; a mirror to his own self. She concluded her paper with an analysis of the movie “By Ourselves” (2015) based on Clare and how all his poems were basically a shift from ‘ecomystical exploration’ to ‘ecomystical communication’.