The platform for the workshop was Zoom and it began at sharp 3pm with a tribute video for Prof.Dr.Divyesh Shah being played created by the Faculty of Morning department of B.Com to mark his one month death anniversary. The workshop was attended by more than 100 students. Followed by the tribute video, was the introduction of the speaker by Prof.Dilip Shah. After the introduction, Ms. Barman without any further ado went straight into the basics of Micro-Fiction. She began the workshop by asking a simple question i.e.  “ Why do we write ?”. Immediately hands were raised for speaking while others quickly flooded the chat box with their answers. Some said “ to express themselves” while many said “ to communicate”. Ms. Barman then went on asking what is the current perspective of students regarding micro-fiction. She further explained that Micro-Fiction is a subset of Flash-Fiction, stories told in 300 words or less-saying it in fewer words.  She then explained that stories can be open ended or closed i.e. either the stories can be left open to the readers’ opinions or could be explained properly in few lines or words. She emphasized that the less words are used , the better it is, as for micro-fiction ,“ less is more” always. She added that the story should have a basic and an end to it and it should be as simple as possible. 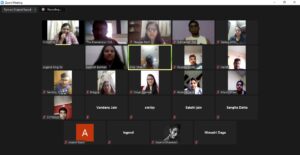 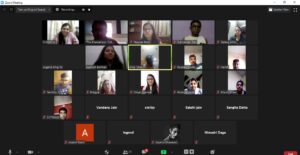 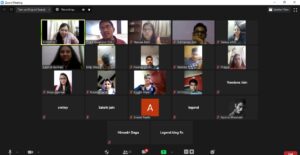 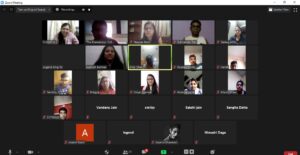 The next exercises involved attendees picking up a theme or a word and creating their own micro-fiction. Numerous words and themes were picked up and the chat box kept flooding with unique micro-fictions for more than 20 minutes. Students kept on writing a new and different story every other minute. After teaching them how to create a micro-fiction and correcting each one of them personally, Ms.Barman then explained what the basic requirements of a good story are. She emphasised that simplicity, relevance , authenticity and creativity is what creates a good story. After the explanation, the attendees again went back to typing out their own creations and soon the chat box was again overloaded with entries. Various students went up on mic to speak about their creations.

To aptly summarise, the workshop was fruitful, interactive , creative and none of the attendees felt that it was a 3 hour workshop. The webinar ended with Suhasini Barman thanking Prof. Dilip Shah for the initiative of organising such a workshop and students being grateful for the session.

Posted in Workshops & Seminar.
←  NewerCrossFire 2020: This house believes that the United Nations has failed to live up to it’s purpose, Coverage on Shubhjita
Older  →Design Thinking With Special Reference To Covid-19