“The baggage of your past cannot determine your future.”

The line quoted above is not just a blend of some mere words. These are the golden words of an average student who made an extraordinary achievement by not letting his “baggage” of not scoring well-enough in his 10th boards, make him hopeless. Rather, he channeled the same guilt and allowed it to motivate him throughout his academic years. And like it is said “hard-work never goes for vain”, his hard-work and utter dedication paid off and how!

Yes, we are talking about none other than one of the finest ex-students of The Bhawanipur Education Society College – Umang Somani. Recently, the college was thrilled with joy when it came to their notice that their alumni cracked the M.B.A. entrance examination with an outstanding overall percentile of 98.08, thereby receiving calls from some of the most renowned B-Schools of the country like IIM, XLRI, NMIMS and IIFT – to name a few! 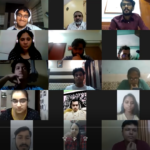 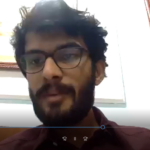 In order to share his success story and enable the fellow CAT aspirants to learn from their dear senior, The Bhawanipur Education Society College arranged a webinar on Zoom on 1st June, 2020 with Umang Somani as the main speaker. The session began at 3.00 pm and continued till 5.30 pm.

The session began with a warm welcome speech by the Dean of Student Affairs of the college, Prof. Dilip Shah, followed by Mr. Umang introducing himself to the fellow students of the college. He then went on and explained the various aspects of M.B.A, majorly focusing on CAT preparations. By providing them with a framework as to how one should prepare themselves for the win, he made the CAT examinations – infamous for being tough and tricky – look like a piece of cake! Then shortly afterwards, a questionnaire was conducted which allowed the students to clear whatever little doubts arose in their mind regarding M.B.A. and its subjects.

Umang then went ahead and heartily thanked the college for brushing his soft skills. He told the students about the various college events he has been a part of throughout those 3 years and how they helped him in gaining some valuable “off the book” knowledge. For instance, the college management event NEXUS helped him in learning how management works, whereas, being in the financial department of the widely famous inter-college event UMANG made him realize his inclination towards managing finance. Likewise, he has been a part of many such college events and went on to address the Dean’s Office as a “pivotal junction” for all the right reasons. Not only this, he personally thanked the Dean of the college, Prof. Dilip Shah for his immense contribution in shaping his personality with special emphasis on ethics, that proved very helpful for him, not just as a student but as a human as well.

With this, the two and a half hour long session finally wrapped off. The Dean of the college lastly congratulated Umang for his brilliant achievement and wished him luck for his future. In a nutshell, it was indeed an interactive session.