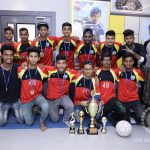 It is heartening to note that this year the The Bhawanipur Education Society College secured the 1st place in FOOTBALL (not so much played in the college).

The scorecard of the Final is as follows: BESC vs CEM Kolaghat – 01 to 00 (Bhawanipur College won) “The college is elated as it congratulates the players and the games department including the football team coach”, said Sir Champak Lal Doshi, the President of the college.

Sir Jitubhai Sheth and Sir Umeshbhai Thakkar were also excited about this feat.

“With this we have opened a new horizon for student activities” remarked Prof. Dilip Shah.