Quoting the infamous Marianne Williamson, “every ending is a new beginning.” A convocation holds the same meaning. Nothing can match the thrill of returning to college, meeting with old friends, gushing through the corridors reminiscing old days, and getting rewarded for the hard work one put into their studies.

This ceremony is held every year at Kalamandir or the GD Birla auditorium. Around 300-400 students graduate with a first division from the college, however, this year all milestones were broken, with over 3325 graduates and postgraduates with a first division. In the middle of the epidemic, the institution agreed to create changes to guarantee the health & wellbeing of its scholars: on the 26th, 27th, and 28th of May 2022. The college hosted the event, which was held at the college’s Concept Hall and Jubilee Hall.

Each slot had around 200 students. Usually, the event takes place over one day, however owing to huge numbers, the event was split into 17 sessions across 3-days.

Line ups of the event were organised and happened in an orderly manner. It started off with the students being seated in their respective seats, and the previous year’s felicitation ceremony video was being played to provide them a glimpse of the event. Followed by the dignities and senior teachers walking down the aisle and acquiring seats at the front row designated to them, while the students stood up. The Master of Ceremony warmly welcomed everyone present in the ceremony, which was followed by a cultural performance and the auspicious lamp lighting ceremony. 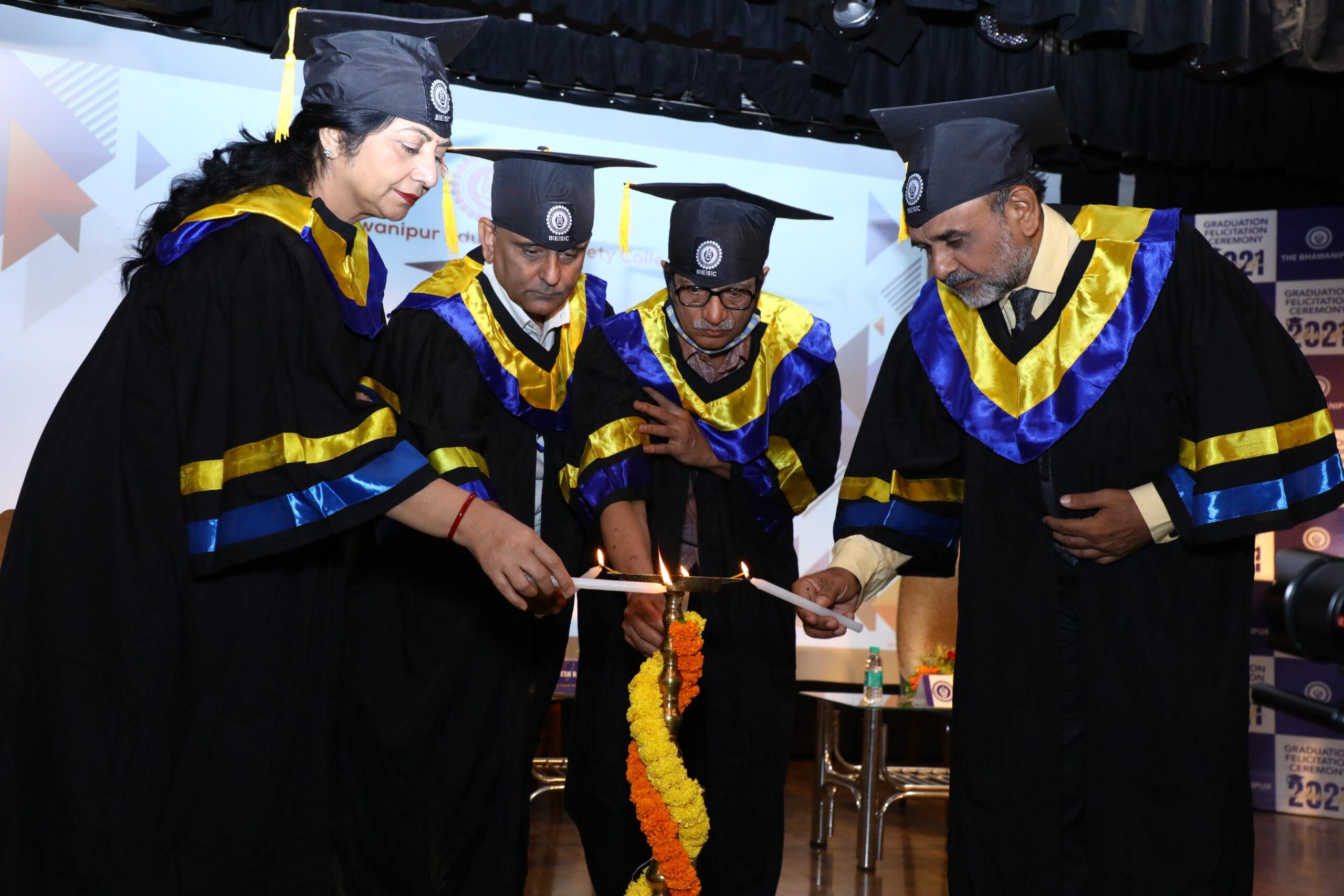 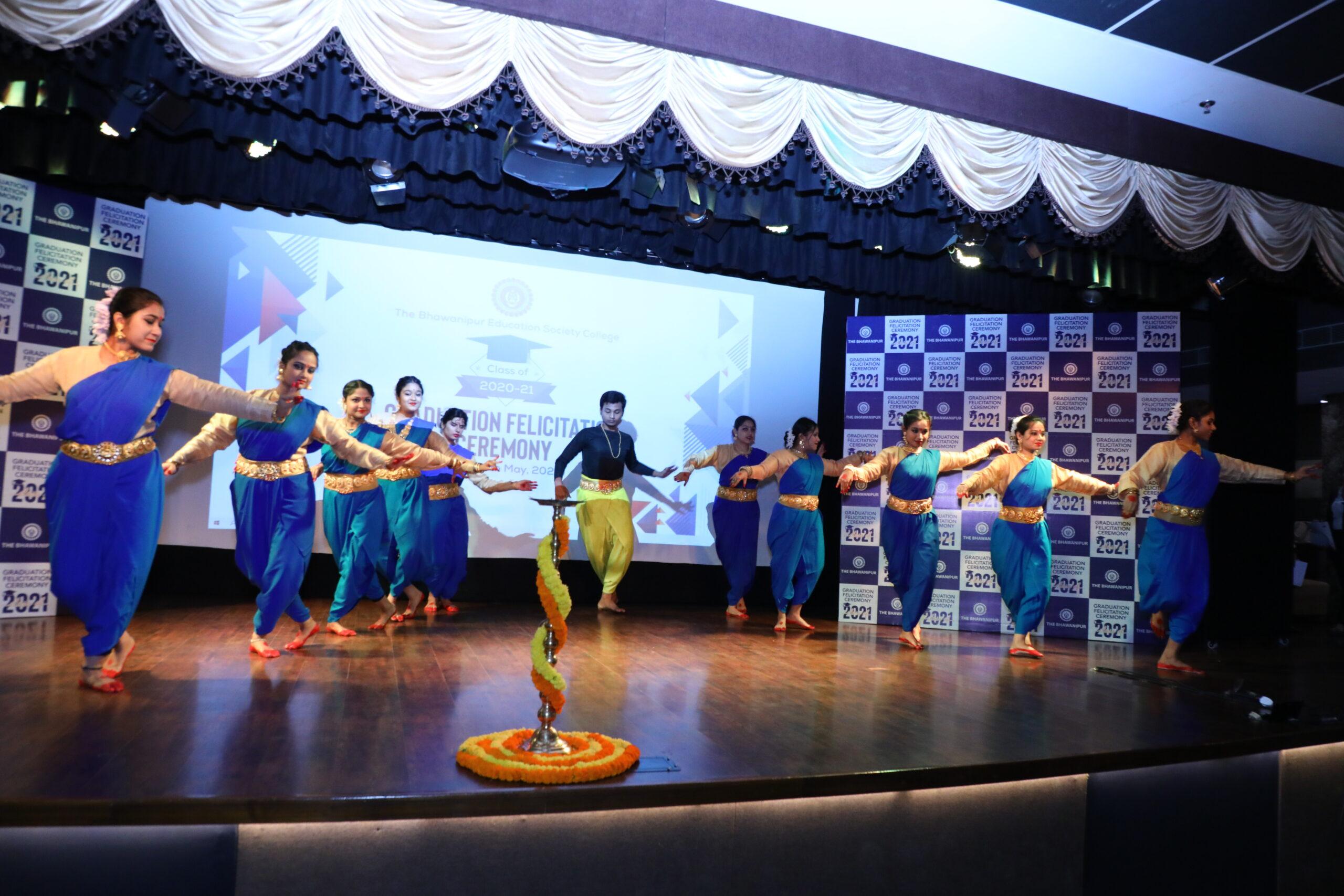 Followed by the dean of student affairs, Prof. Dilip Shah taking the dais, with his moving words, “You may leave Bhawanipur, but The Bhawanipur will never leave you”. He mentioned that a student can always come back and contribute to your alma mater. He also touched on the various career connect course running in the college that they can still enroll themselves in.

Thereafter, the oath was administered by different members of the management and head of departments for the different sessions.

“I pledge to use my knowledge, experience, and skill to the best of my ability for the well-being of humanity. I will conduct myself responsible and shall respect the right and opinion and dignity of all. I will be a loyal ambassador for my alumna matters and will seek to maintain and enhance its reputation in all my dealings. I will endeavour to be known as a person of honour and will repute ever seeking to earn the peace of good conscience.” 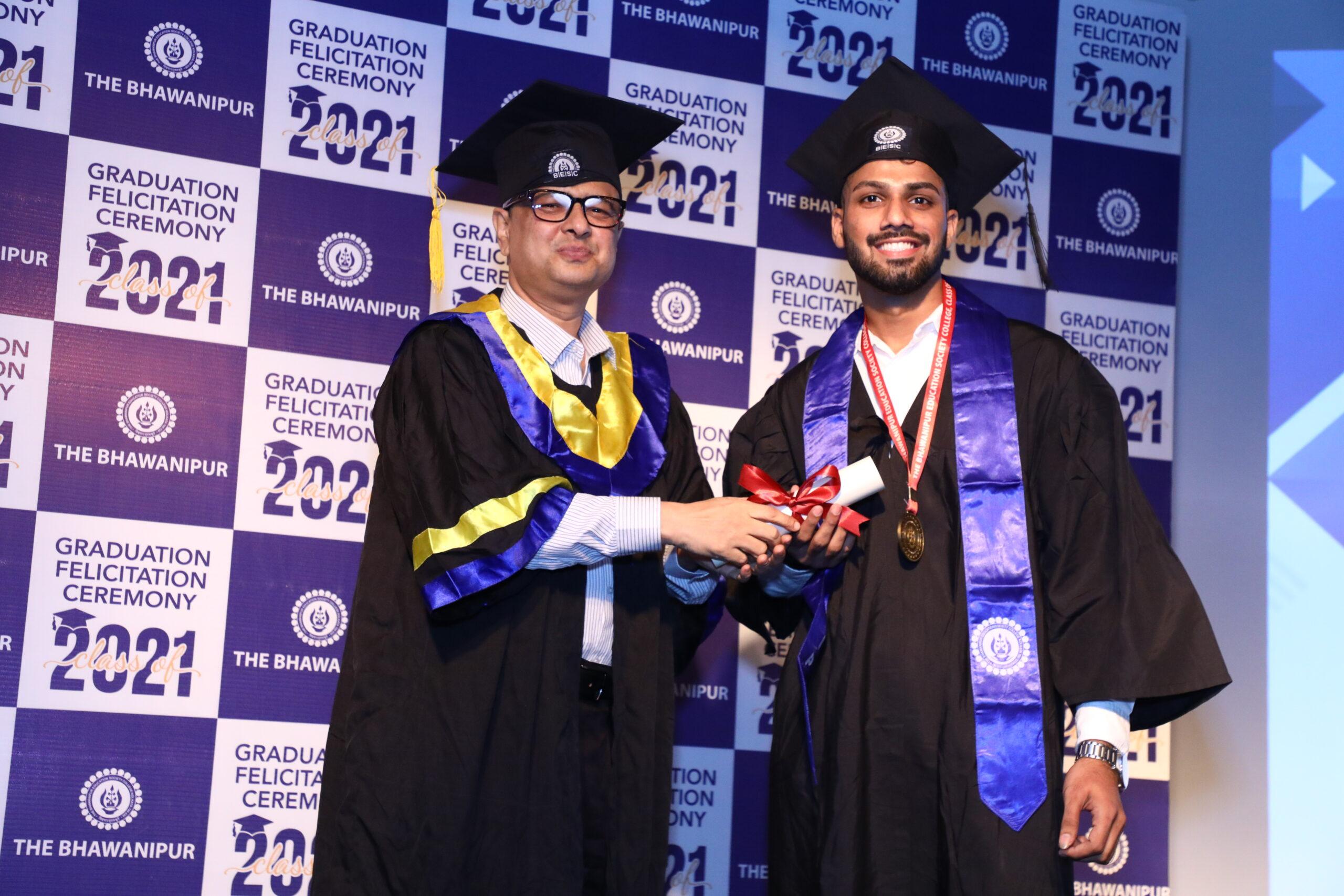 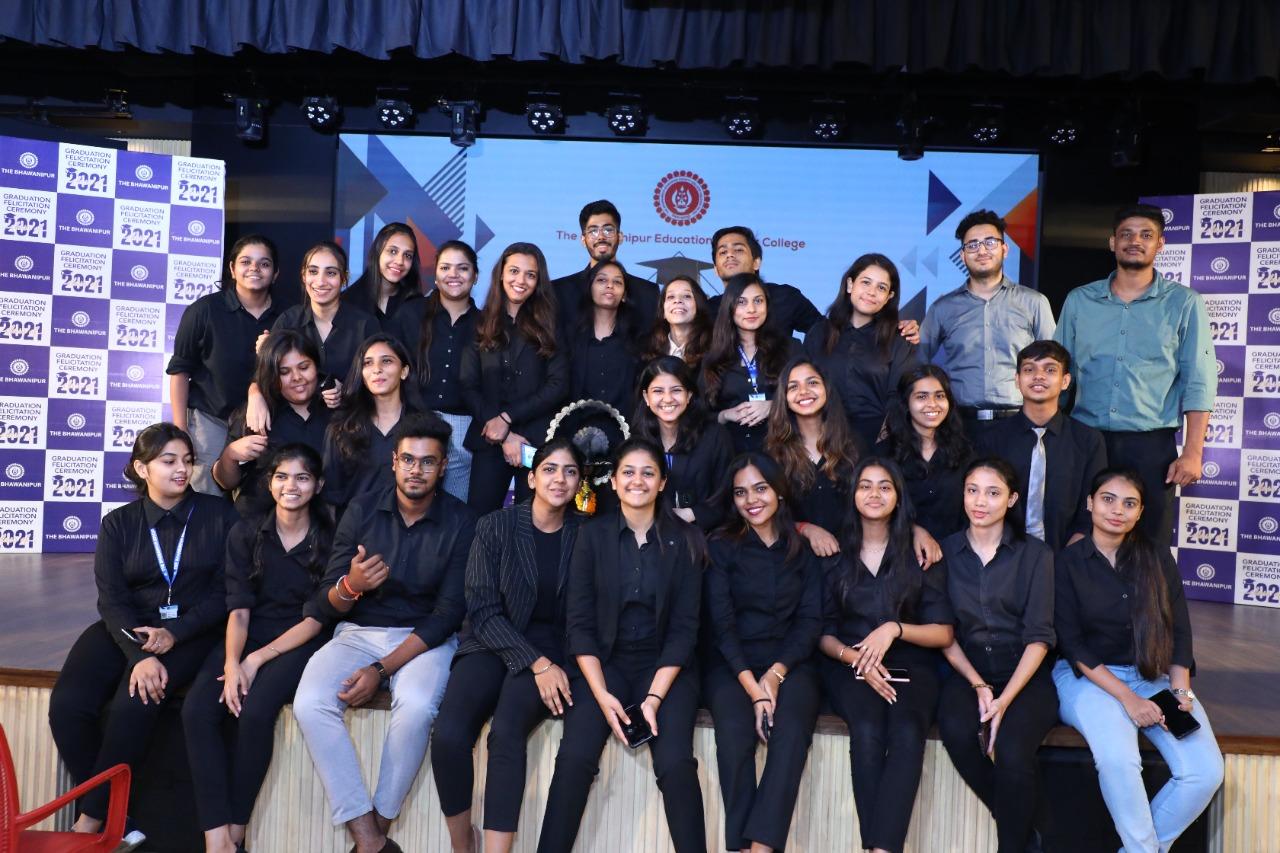 Soon after, the graduates dress in robes were felicitated with their medal, certificate, a congratulatory handshake, a smile, and a picture. Once everyone was felicitated the most awaited part came up. 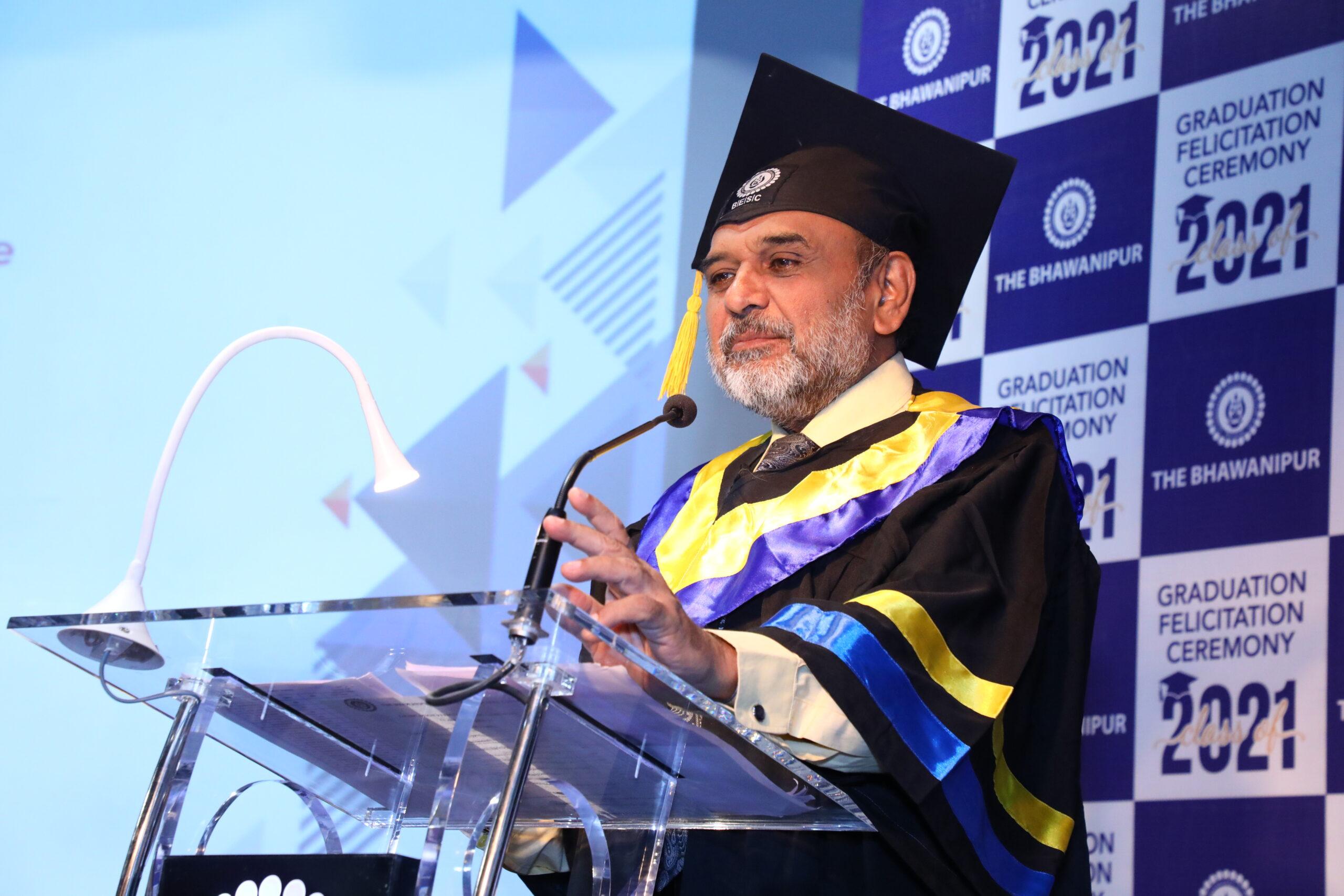 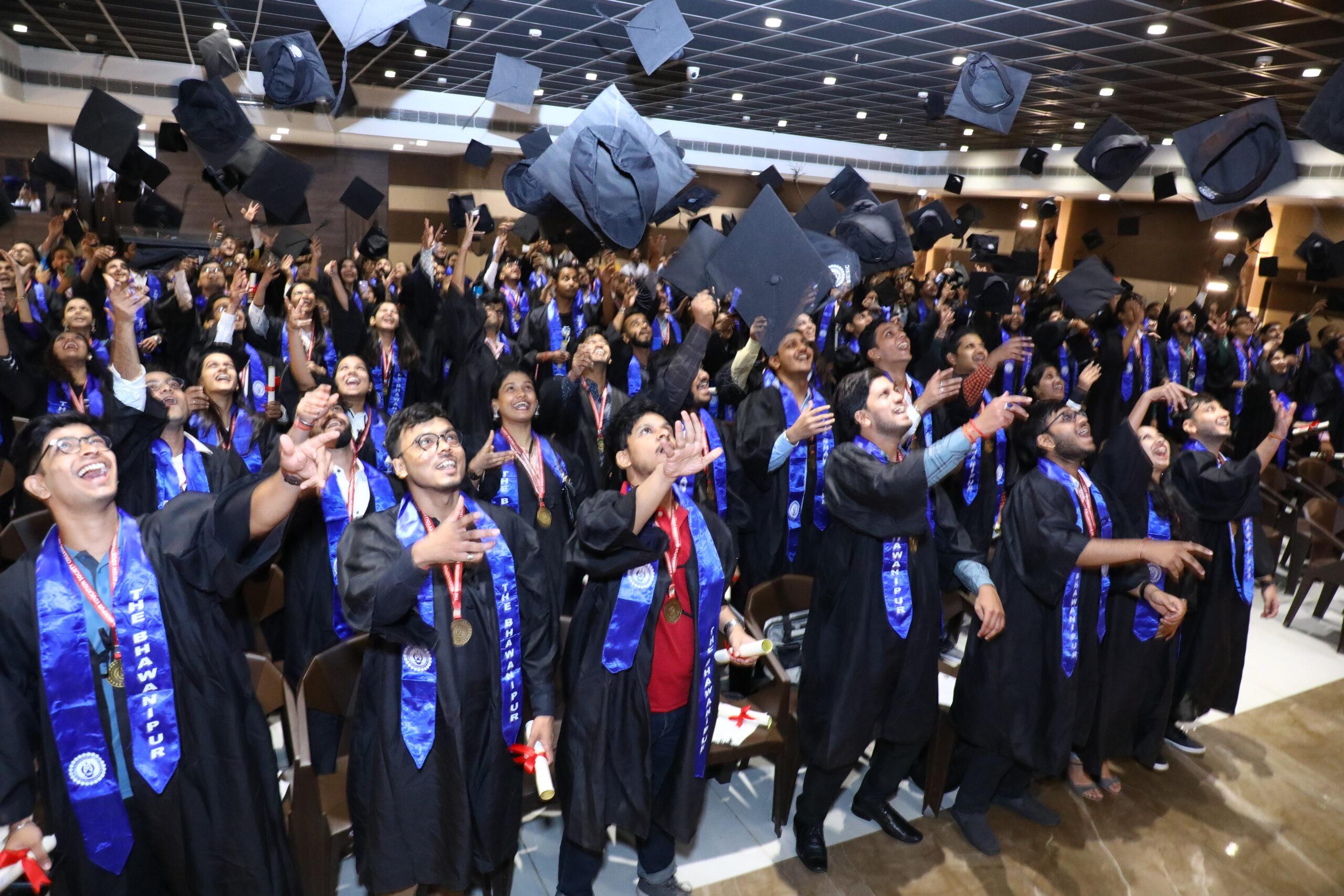 At the end of the ceremony Prof. Dilip Shah told the student that he will not say bye on their farewell rather he said “avjo”, which means come again. He said that their relationship with the college will always remain. Once a Be-ites, always a Be-ite. He then instructed them to toss their hats on the third “hip, hip” and here’s how it went,

Hats flew over representing the proud, happy, deserving, graduates and postgraduates from The Bhawanipur Education Society College, class of 2021, flaunting with degrees in hands and faces brightened up with luminous smiles.