The fest was inaugurated by the song “Words” sung by one of the college student Rohit Ganesh, a 2nd year student. With such apt lyrics of the song the literary event was inaugurated by Mr. Miraj.D.Shah (Senior Vice-President) of the Bhawanipur Gujarati Education Society.

This was followed by unveiling of the college magazine named MOSAIC EXPRESS by Mr. Miraj.D.Shah along with the other committee members and Prof. Dilip Shah.

The festival boasted of nine events:

Extempore: Participants were given a topic on the spot where they had not only to structure a speech but speak about it all in just 2 minutes.

Debate: Participants were given a topic “THIS HOUSE BELIEVES THAT THE MEDIA IS DRIVEN BY MORE BY THE TRPs AND LESS BY INFORMATION THAT CONCERNS ALL SECTIONS OF THE SOCIETY.” Each member of the team had to speak for and against the topic in a span of 2 minutes.

Spell Bee: A round which tested the spelling accuracy of all the participants.
Mock Parliament: Participants had to express their opinions as if they were a part of a parliament under the motion, “THIS HOUSE BELIEVES THAT LARGE SCALE MEMORIAL PROJECT ON PUBLIC EXPENDITURE SHOULDNOT BE UNDRTAKEN BY CENTRAL AND STATE GOVERNMENT.”

Quiz: The event which stressed on the general knowledge quotient of the participants and also their awareness of their surroundings.
Block and Tackle: The moderator would float across a topic to the participant, who would have to constantly BLOCK (speak against) and TACKLE (speak for) under the instructions of the moderator.

Live Reporting: The participants were shown two videos with a mute audio, the participants had to choose a video and voice their opinion on the video.

JAM: Just a minute, the participants were given a topic by a moderator and a student would be asked to speak on the topic unless objected by the other participants either on grammatical or punctuation errors, if the objection stood true then a positive point and if the objective was proved wrong it would be a negative marking.

VERTEEZ: The moderator would think about a person or thing, the participants would have to guess that by asking them multiple questions. The earlier the answer guessed the more the points scored.

Creative Writing: The platform where students get their chance to paint their canvas with words and exhibit their amazing talent.

All these events were judged by eminent people in their field, namely Mr. Parnab Mukherjee, Mr. Amar Agarwal, Mr. G. Jai Shankar and Mr. Arnab Chakroborty.
On conclusion of the festivals the prizes were handed over to the winners and a special award referred to as the Star Of Communique was adjudged, Kumar Popat, a 3rd year student of The Bhawanipur Eduction Society College who bagged 5 awards (2 first, 2 second and 1 third).

The programme was an enormous success as more than 200 students took part in around 9 events bringing laurels for their respective colleges. 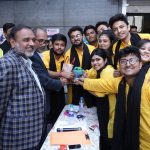 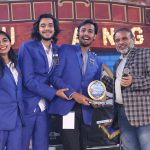 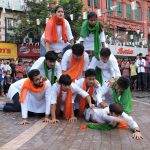 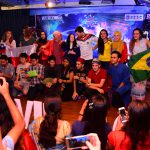 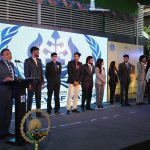 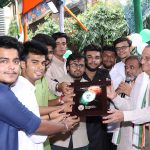 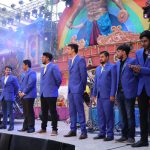