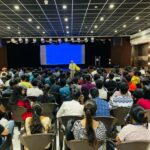 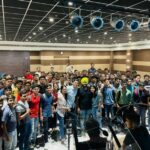 The Induction of the Bhawanipur Entrepreneurship & Start-up Training (B.E.S.T) collective was conducted on 29th September 2022. The Induction was conducted in Jubilee Hall with more than 100 students. As all the first-year students from different departments sat down, the representative of the collective Simarjeet Singh Walia introduced to the freshers’ details regarding what this collective is all about with the help of other members Yash Bhanthia and Vedika Jaju, who shared their experiences from last year’s events.

It was a motivating session which was full of interesting insights, and we found many budding entrepreneurs among the audience who shared their experiences and stories with us. This session was concluded with an enlightening speech by the Dean of Student Affairs, Prof. Dilip Shah who rightfully quoted “Th

is place is where we make Entrepreneurs.” 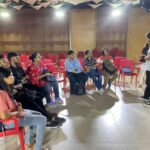 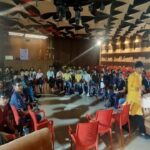 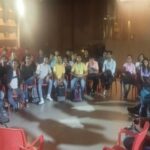 Bull’s Eye collective of The Bhawanipur Education Society College conducted an induction on the 21st of September for the newcomers at the Concept Hall. The reps Siddharth Lathia and Hardik Mishra conducted the induction which had more than 60 students from all the departments.

The 1st years were excited and at the same time were amazed with the how the induction took place, several activities were conducted which helped the students open-up and share their opinion about the collective. They were also told about how BESC Bull’s Eye has given people the opportunity to start investing in stock markets by learning from the best in the industry and putting it to practical use.

Overall, the induction was very productive because it helped the students in knowing more about the collective and how they can put their knowledge to good use. 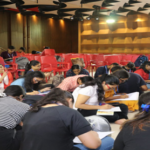 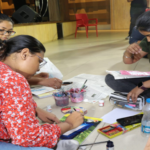 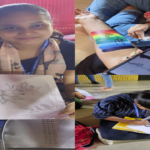 On 20th September, college conducted an induction for the Art In Me Collective. Induction commenced at 12 noon in Concept Hall. It was attended by about 50 students from different streams.

It started with the speech by the collective representative, Komal Thakur in which she explained how the collective functions, past events, workshops and how Art in me plays a major role in all the events taking place in the college.

Keeping the same ideal forefront, all the students took part in a fun activity organised by the core members of Art in me.

The main objective of this activity was to bring out their hidden creativity on the art sheets.

It was organised to explore and encourage creativity in students and offer them a platform to showcase their skills.  It inspired them to think and to work creatively in order to promote artistic excellence.

The artistic endeavours of the students were highly praised and encouraged by the collective representatives as well as by the Dean of Student Affairs.

In the end, everyone was informed regarding the upcoming events and workshops. 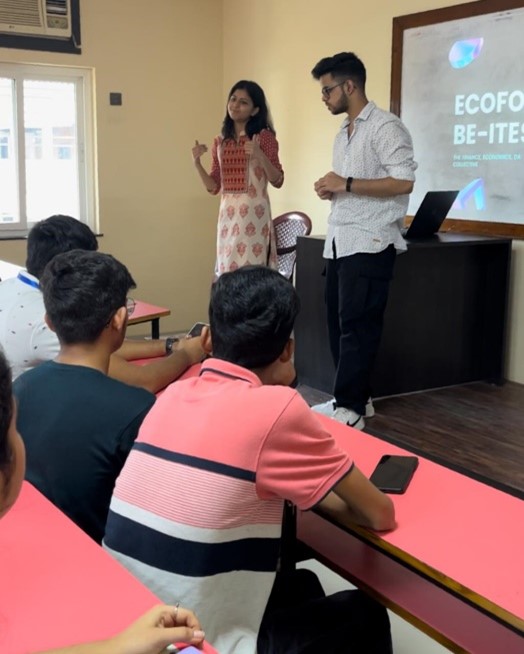 The new batch of the year 2022 who had interest in knowing about the collective EcoFor Be-ites were welcomed in the induction session conducted by the collective representatives and its members. The induction was a brief introduction about the collective and what it focuses on Economics, Finance & Data Analysis. Extend economic education beyond the classroom and touching the future of application through the realms of theory.

The audience was interactive during the whole session and lastly the session ended with an FAQ session where doubts of audience were answered. 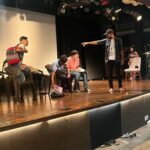 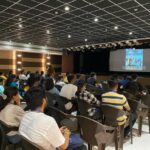 “All the world’s a stage and all the men and women merely players”. Who doesn’t know this famous quote of Shakespeare. Yet, the entire group of activities that Enact takes up is difficult to define. The collective mesmerises the audience with its enrapturing portrayal of social and cultural impish. Enact is one of those many collectives offered by BESC, in which performers wield the baton of taking the stringent issues to fight against. BESC has always extended their support for being creatively audacious and to make the fresh buds aware of this wonderful collective of expressing themselves through this platform, the Bhawanipur Education Society College conducted the ‘Enact Induction’ on September 21, 2022, from 2:00 pm onwards in Jubilee Hall.

The Induction ceremony commenced with the collective representatives inviting all the 1st year students who were nearly 150 in numbers and all the members of the house respectively. They continued to explain to the audience, cheerful, lively and a bit tense at the same time on what Enact is, how it works and what its future plans are. The audience were also given information regarding the programmes that take place throughout the year. An audio Visual was shown to the students to help them understand the standard of the previous performances. We also provided the newcomers with the stage to showcase their Talents in front of the crowd. We conducted various fun yet productive activities such as Improv Acting, Group discussion-based roleplay, etc. Overall, it was a great session with lots of fun and activities so that everybody takes part in this lovely collective. 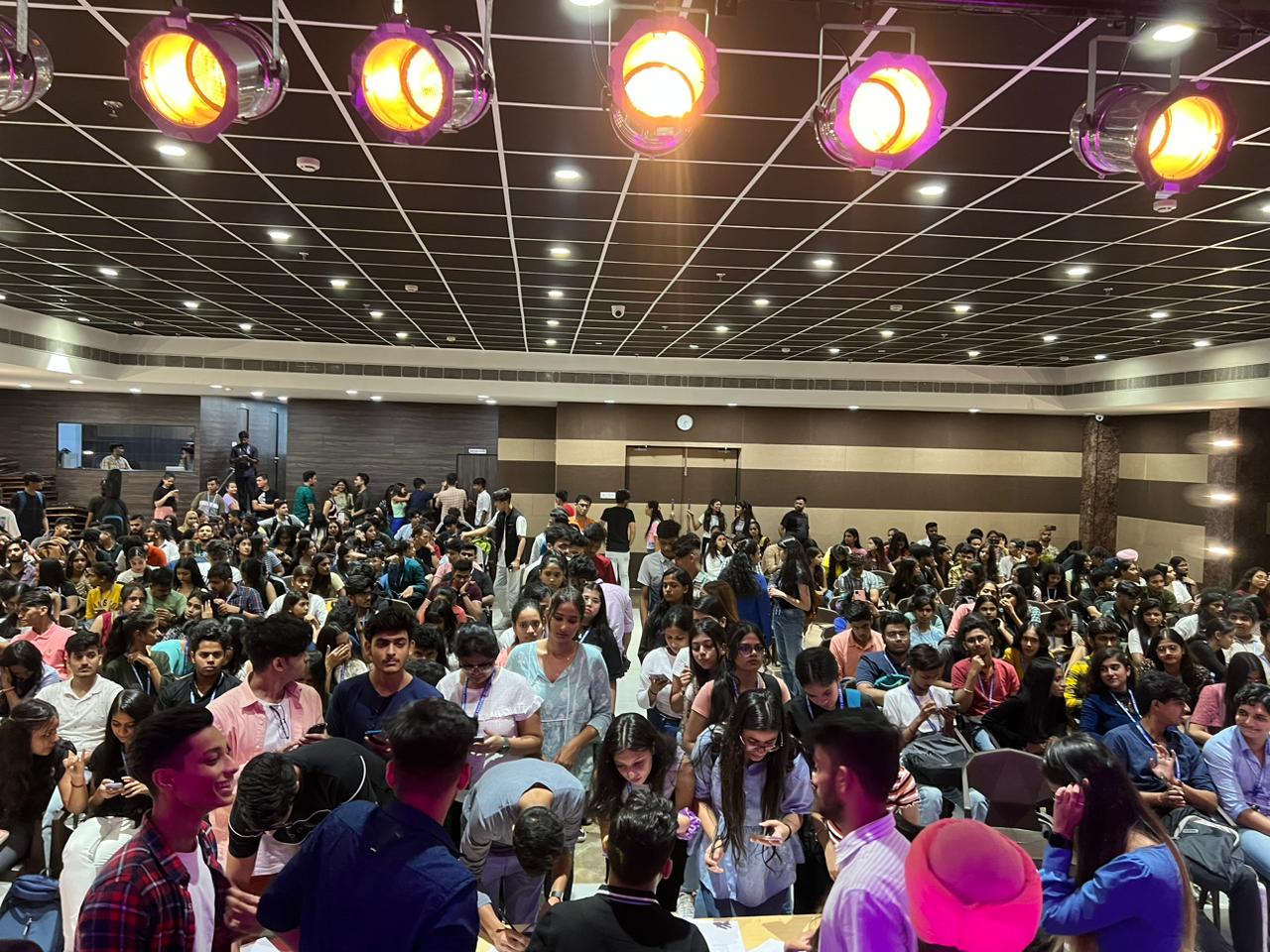 Style and confidence are what the Fashionista collective at the Bhawanipur Education Society College is all about. The collective had its induction on 26th September at 2 pm in the Jubilee hall. As first year students from various departments sat down, they were greeted by the representatives of the collective Anamika Shrivastava and Dhwani Patel, who informed them about the activities such as modelling workshops and wardrobe styling that take place. After a detailed introduction, the students were asked to come up on stage and showcase their runway skills. The students, two at a time, walked the runway to the beats of cheerful and lively music. The induction ended roughly at 4:45 pm with a vote of thanks given to the Dean of Student Affairs, Prof Dilip Shah. 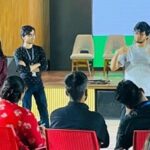 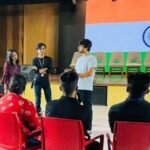 On 20th September, the college conducted an induction for the collective Phenomenon. The induction commenced at 1 PM in the Concept Hall with students from all departments. It started with a speech by the Phenomenon representative, Gourav Choudhury regarding social ethics and on upcoming technology.

Post that an interactive session began between the existing members and the new members, in which the very design of the collective, the motivation, and the idea that made Phenomenon was discussed. Some topics were also discussed like Time Travel, Parallel Universe, Simulations, metaverse, The Big Bang Theory and a lot more. It also included discussion on sci-fi movies like Inception, Interstellar, etc.

Later half of the induction, Dean of Student Affairs and the students had a fruitful and interesting discussion on the possibility of a new education systems and the impact it can have on the building of a new generation of learning.

In the end everyone was informed about the upcoming events and how things are going to be done in the future. The induction concluded with a question-and-answer session. 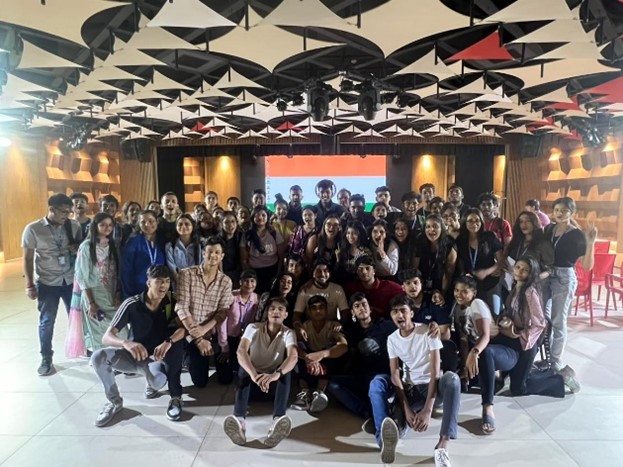 REEL’S collective of The Bhawanipur Education Society College conducted its induction on the 26th of September 2022 for the newcomers at the Concept Hall. The reps Shakir Hossain Samarth Kumar and Vedic Saha conducted the induction which had around 60 students from different departments.

The 1st years were excited and at the same time were amazed with the how the induction took place, several activities were conducted which helped the students to open up. They were told about the collective and the genre they were interested. As the name suggest ‘Reels’ are entertaining, immersive videos where you can creatively express your brand story, educate your audience, and get discovered. Students interested joined the  Reels collective to participate in cultural trends, cover the events, vibe on the campus and discover new ideas/ students/talents.

Overall, the induction was very productive because it helped the students in knowing more about the collective and how they can put their knowledge to good use. 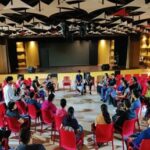 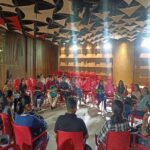 SETU collective of The Bhawanipur Education Society College conducted Induction on the 21st of September for the newcomers at the Concept Hall. The rep, Anirudh Bajoria with the co-rep, Ayush Tewari conducted the induction which had over 50 students from all departments.

The 1st years were excited about the activities that are conducted under the collective to help them experience a brand-new culture, meet new people and grow as a person. The students were told about the upcoming events that are going to take place and how they can experience different culture and perspective, Leadership development, cross-cultural global internships and volunteer exchange experiences. Overall, the induction was a great success as the students found it very interactive and helpful. 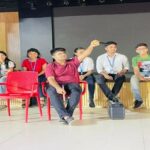 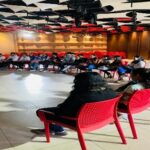 Vox Populi collective of The Bhawanipur Education Society College conducted Induction for the neophytes on 26th September,2022 at the Concept Hall. The rep, Parth Udeshi and the co rep, Tushitaa Chhughani of the collective conducted the induction with mindful interactions and few public speaking activities. The induction was attended by more than 30 students from all the departments.

The newcomers although both amateurs and professionals are equally welcome, it is a select group of people who are passionate about debating. We introduce the participants to various debate formats and help them develop skills which in long turn helps develop confidence, public speaking, quick response, and impromptu thinking aspects and helps them in their career. They were also introduced to various pointers about anchoring, a field in which most of them were interested. The overall induction was productive for the all the students.

Expressions
Our ability to express ourselves wins us the respect of others. Keeping this in mind the Expressions collective held its induction on 24th September 2022 at 10 AM in the library of the college for first-year students from various departments.

The event began with the representatives of the two main verticals Photography and Reporting; Akshita Suri, Prerona Gupta, Sagnik Ghosh introducing themselves. Later, Dean of student affairs Professor Dilip shah addressed the students regarding the importance of the work performed here. The students were then asked to sit separately according to the vertical they wished to join. The Representatives of the reporting and Photography vertical gave their newcomers a detailed explanation of the different activities that take place such as Photography workshops and creative writing seminars. The event concluded with the newcomers leaving as a new generation of reporters and photographers for future college events.