Society hall, November 22nd, 2019. The Bombay Stock Exchange (BSE)  is one of the premier institutions in the world of finances. Established in 1875, BSE  is Asia’s first & the Fastest Stock Exchange in world with the speed of 6 micro seconds and one of India’s leading exchange groups. Over the past 143 years, BSE has facilitated the growth of the Indian corporate sector by providing it an efficient capital-raising platform. Popularly known as BSE, the bourse was established as ‘The Native Share & Stock Brokers’ Association’ in 1875. In 2017 BSE become the 1st listed stock exchange of India. 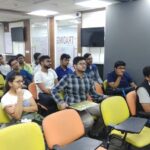 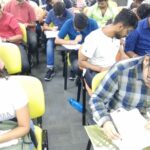 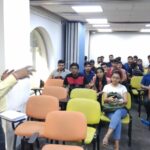 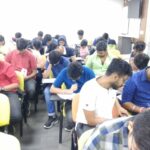 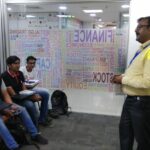 The relationship that the BSE has with the students of The Bhawanipur Education Society College (BESC) has been one that is nearly symbiotic as BE-ites have been associated with the stock markets in general and the BSE in particular for years at an end, often over generations. Thus, the visit of BSE functionaries to the college campus is always an even worth recounting and this wone was no exception.

About a hundred students participated in a highly engaging seminar in which speakers from the BSE took the students on a whirlwind tour of the financial system, starting with explanations about the basics of the stock markets and their functioning through to the creation of wealth and the current state of the economy and the markets.

Detailed presentations were also made about the emergence of Artificial Intelligence (AI) especially in relation to algorithm-based trading and the role of AI in the compilation / analysis of financial data. The most visible face of AI – as a robot doing the menial, repetitive work was touched upon but left out as it was considered too pedestrian for the interest of the students who were found to be in possession of interest that ran much deeper.

Prof Dilip Shah, the Dean of student affairs of the BESC welcomed the guest speakers and felicitated them on behalf of the management, faculty and students of the college. In his brief introduction before the formal start of the programme, Prof Shah, one of the most celebrated experts in the functioning of the markets and their dynamics, in his characteristic manner set the note of the seminar which was lauded and appreciated by the visiting speakers.

(This report has been filed by Nikita Mittal along with camera person Suyash Agarwal of the Expressions Collective of the BESC. Suyash Agarwal was the student co-ordinator for the event.)