June 29th, 2019. The menace of drug addiction is one that is corroding the very soul of India, with the youth being the most vulnerable to succumb to it. Peer pressure, increasing societal expectations, the breakdown of the joint family system and an unhealthy burden on young minds to succeed against all odds, is forcing many a young bud to wither away even before it blooms. While the Laws can attack the supply side of the problems, increasing the stringency on those peddling substances that can be abused, the demand side, it is well appreciated, can only be addressed by creating greater awareness about the menace and the younger generations can avoid being enslaved. 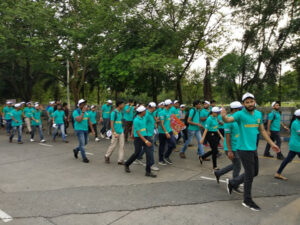 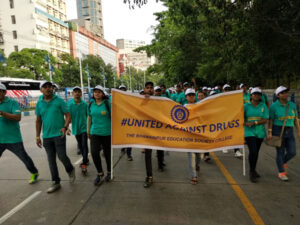 It was with this aim in mind that the Kolkata Police organised a “Anti-Drug Walk”, which not only sought to highlight the hazards posed by drugs but also sought to communicate the fact that it is possible to “kick the habit” to shake out the dependence on drugs. As a matter of fact, as many as two score plus people were presented – people, who had successfully waged the war against addiction, and won.

The programme was graced by many youth icons and celebrities from the worlds of entertainment and sports, including Usha Uthup, Dev, Abir Chatterjee, Shrabanti Chatterjee among others. Top bureaucrats from the state Government, senior police officers including the Commissioner of Kolkata Police and other senior functionaries from related departments of enforcement and rehabilitation, were present to lend their support to the cause.

Students from major institutions of the city and representatives of prominent NGOs working in the field were also present. However, it was the members of the Dog Squad of the Kolkata Police, canine crusaders, who won the hearts of all those who had assembled by showcasing the different ways in which they are helping the law enforcers to take the fight to the enemy.

The students of the Bhawanipur Education Society College (BESC), led personally by Prof Dilip Shah, the Den of Student Affairs of the institution took part in the walk. Prof Minakshi Chaturvedi and Rupesh Gandhi were also present in the occasion.

The walk started from Allen Park in Mother Teresa Sarani and winded its way through Rawdon Street, Shakespeare Sarani and Jawaharlal Nehru Road to finally culminate in the Police Club in the Maidan where light refreshments were served to the participants.

The BESC students with their “Say no to Drugs : Say Yes to Life” placards were an important constituent of the walk and were lauded for their spirited participation by the organisers. T Shirts that were given to the participants of the BESC to mark the occasion were gracefully returned by the students for distribution to the security staff, a gesture that was very well appreciated by the senior police officers who were present.