The Dean’s office witnessed a discussion of another sort when about twenty students spoke their hearts out, gently goaded by Professor Dilip Shah, the Dean of student affairs of the Bhawanipur Education Society College (BESC). The idea was to confront the fears that stalk us; to inculcate the habit of sharing them with our near and dear ones; and in the process, overcome them to march towards our respective goals.

At the very onset the meaning of the term “anxiety” was established – a feeling of dread that is caused mainly, but not exclusively, by past events that make it hard to be confident about the future. Overthinking, too, it was pointed out, is a cause for anxiety, which forces people on an endless loop of trying to anticipate the future. As Prof Shah pointed out, anxiety must be confronted, with a view towards nipping it in the bud, as left unchallenged it feeds on the fear it generates, leading ultimately to depression, with all its attending rigmarole.

On the flip side, the very act of taking anxiety by the horns, creates in its wake a feeling of elation, of success, of ennui even, that lead to the ultimate triumph over it. And, everything begins with a small step – that of accepting the presence of anxiety, for ignoring it in the hope that it will be “wished away” is a fallacy that should be avoided at all costs. 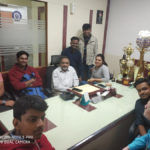 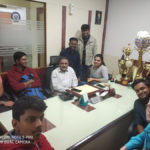 However, what made the session extremely meaningful was its interactive nature, where the students took turns to recount what had been their worst fears and how they had overcome them. Yash and Swapneel talked about how anxiety had initially numbed them to the point of defeat, and how they had overcome their fear of public speaking to emerge as start performers in MUN.

Ashish Ranjan an alumnus of the college recounted a childhood experience where he was anxiety ridden to the extent of wanting to drop out from a race, but had persevered and, with his school mates cheering him, had gone on to win the race, overcoming his fear of failure in the process.

Shivani talked about the time, when despite her desire to join her friends in the basketball court, she could not overcome her initial reluctance, scared as she was of being unsuccessful. She went on to explain how she had gathered her courage to take the first faltering step towards the court, and how, ever since, there has been no stopping her.

The session was, by all intents and purposes an extremely enlightening one for the participants as they heard, their own peers discussing their innermost fears and were also provided with real and live examples of friends overcoming the adversities to emerge triumphant. Naturally, the effect rubbed off, and the good vibes that radiated from the conference hall in the Dean’s Office had to be seen to be believed. “Bring it on”, was the silent scream, as the participants quietly confronted and sized their own inner anxieties even as the deliberations proceeded, ready to pick up the gauntlets that life throws on the way.

Prof Dilip Shah, who is a living thriving example of this positivity, perennially radiating good vibes, smiled as he led the students through the discourse, gently urging them to take the first step forward, even as he explained the philosophy of his life – there is nothing but fear itself top fear of.

“Anxiety? Now, what the hell is that”? The students walking out were confidence personified, having given anxiety the quiet burial it deserves.

Well, that was just another day with the “Dean Sir”, at the BESC.

This report has been filed by Yash Chamaria of the Expressions Collective of the BESC.