26.11.2019. Society Hall. As the fourth revolution unfolds at a speed that is faster than thought, Artificial Intelligence, AI, is marching towards global domination, whose ultimate consequences are still beyond the realm of man’s understanding. No longer is AI restricted to first generation robotics that found application in mass production and has already made the transition into fields as diverse as medicine, banking and defence. What is more, experts opine, AI has now reached the critical mass where it can feed on its existing knowledge to empower itself with more knowledge – ad infinitum. 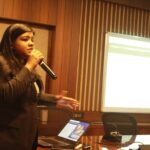 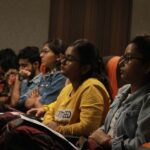 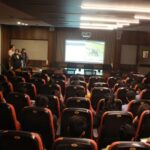 While popular fiction has been replete with stories of a doomsday for the human kind with AI driven machines edging everything on the way out to attain supremacy, the fact remains that in the wake of an AI led industrial revolution, future generations must be equipped with the necessary skill sets. Many traditional skill sets, which were enough to ensure a cushy life and career will fall by the wayside as more and more AI led units will take up their positions which will inevitably lead to massive job cuts rendering many people unemployed.

The Bhawanipur Education Society College (BESC) which has always remained in the very forefront in embracing emerging technologies and in equipping her students with the right skill sets to ride the crest of change to the future, organised a seminar on Artificial Intelligence to expose students to its efficacies so that they may start working in right earnest to reap its benefits. In keeping with its tradition of partnering with the best in the class, the seminar was organised with Amazon, a name that requires no elaboration.

About fifty select students were exposed to the working of Amazon Go and were taken through a power point presentation which not only highlighted the emergence of AI but also talked about the changing world order that is taking shape in its wake. Ananda Guha Thakurata, who conducted the thought provoking and highly topical seminar faced a barrage of questions from the audience on the conclusion of the presentation and took great care in addressing all the issues raised individually and to the complete satisfaction of the audience.

“I am extremely impressed by the sheer level of knowledge about the specifics of the matter, not to mention the general level of inquisitiveness of the students of BESC” he beamed. “It was a pleasure being here and I look forward, to many more such interactions in the future with the students and members of the faculty of the college. My sincere thanks to Prof Dilip Shah, the Dean of student affairs of the institution and Prof Minakshi Chaturvedi who were extremely proactive and facilitated the entire process without which we could not have organised such an engaging interactive session with the students.”

(This report has been filed by Gaurav Killa along with camera person Gaurav Killa of the Expressions Collective of the BESC. Gaurav Killa was the student co-ordinator for the event.)