A discussion meet on “Companies Act 2013” was held on 27th of March 2015 at Room no. G1 in the evening at 5:00 p.m. There have been wide spread changes in the law which needs to be understood well by all and hence the meet was timely and topical. The speakers for the day were Mrs. Mamta Binani, Vice-President of The Institute of Company Secretaries of India and Mr. Siddhartha Murarka, a Company Law Advocate. The meet was attended by Professors of other colleges and also same from our own college. The co-conveners of the programme were Prof. Dibyendu Banerjee and Prof. Meenakshi Chaturvedi.

The session started with opening remarks by Prof. Dilip Shah, the convener, who introduce everyone with each other and thanked them for their precious time in attending this interactive programme. Mrs. Mamta Binani delivered a detailed understanding of the new Act. She started with explaining the different kinds of resolutions in a company, the Entrenchment Provisions and later explaining the Sec. 42, Sec. 62 and Sec. 73 of The Companies Act 2013 for raising the capital of the company. Random cross questions and doubts by the audience were suitably answered by the madam speaker.

Next, the evening continued with Mr. Siddhartha Murarka, by introducing the audience to different kinds of companies including the One Person Company (OPC) introduced by the new Act, followed by discussing the concept of the Leakgate, the Officer in Default, Auditing of the company and the Key Managerial Personnel (KMP). He concluded with the concept of CSR (Corporate Social Responsibility).

The highlight of the evening was active and intelligent participation of the students who were admired by the speakers.

The intellectual discussion came to an end in a befitting manner as mementos were handed over to felicitate the speakers. Prof. Shah further said that such meetings shall be more regular as the response was encouraging indeed. 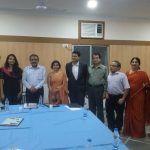 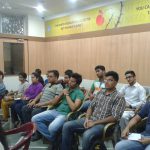 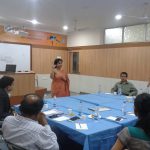 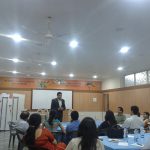 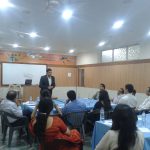 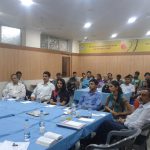