The students of the BA department of the Bhawanipur Education Society College (BESC) presented on Januray 13 th 2018, a unique play in the Concept Hall before an audience that was not only floored by the high level of dramatic performance but also the raw content of the play that was capable of being interpreted in different levels. 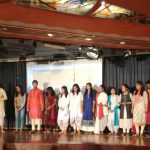 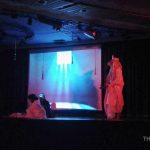 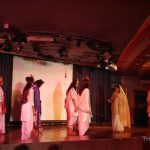 On the face of it, the play was ostensibly a retelling of episodes from the Mahabharata – relating primarily to the saga of revenge by Draupadi and Shakuni.

However, on a more contemporary level, it was a play with deep undertones about the property disputes that beset our society.

The programme was inaugurated by Dr Subhabrata Gangopadhyay, the Vice Principal of BESC who commended Viral Porecha and his fellow batch mates for conceiving and communicating through the play.

The actual play was of a forty-minute duration during which time as many as sixteen characters were presented as parts of the narrative before the audience.

All the actors showcased histrionic skills of a very high order and the way they had mustered that arts of theatre – use of floor space, voice modulation, dialogue delivery, expressions – was indeed commendable, coming from callow college students.

The performance supported by Dr Kavita Malhotra and other members of the faculty.

The performance was followed by a gripping interactive session in which questions were raised from the floor that were answered by those associated with the play.

The report has been filed by Nitin Waghela of the Expressions Collective of the BESC.