A fashionista is a soul that is devoted to all things fashion and fashionable, designer, a draper, a dabbler in haute couture. Going by the definition, the annual ode to fashion, tribute paid by The Bhawanipur Education Society College (BESC) could not have been more aptly named. For dressed after a fashion, definitely are the students of BESC and the fest celebrates not only what is in vogue, but also sets the trends that spreads to other campuses, before becoming the wildfire that they normally become.

Mrs. Renuka Bhatt was the Chief Guest of the gala ceremony that the students had planned to mark the opening of the event. She was welcomed on stage by Prof Dilip Shah, the Dean of Student Affairs and felicitated. “Fashion is about creativity” she said “in which you create something simple that transforms into something elegant” before lauding the students for their excitement and hoped that the event would bring to the fore many hidden talents that use the platform to transform their creations by breathing the fire of creativity into them and transforming them into elegant pieces of art. 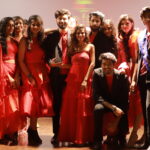 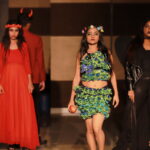 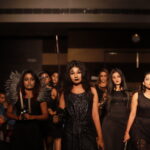 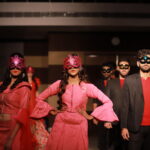 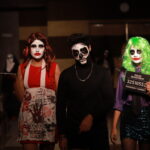 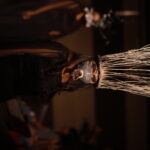 Prof Dilip Shah explained to the guests the different genres of fests organised by the BESC students and how college uses them to empower its students. He also stressed on the fact that “being fashionable” to BESC means a lot more than being up-to-date in terms of attire or makeup, but the term is used to denote the entire gamut which also includes awareness among other things.

Roopa Kamdar, a fashionista herself and an invited judge for some of the events was also felicitated by the Dean.

Fashion Show: Fashion has never been afraid of making statements and the organisers of The Bhawanipur Education Society College Fashionista were joined in their effort to make their mute scream heard by eight college teams of twelve members each – ninety-six contestants in all, as they walked the ramp presenting to the audience their take on the matter that concerns us all.

The event was judged by Mik  Bagui and Adnan Hasan. The fashion show was without a doubt the high point of the fest as the contesting teams left no stones unturned to come up with their version of the perfect ensemble.

Hair Styling: Eight participants representing various colleges took part and were judged by Abhinav Saraf, the owner of Pony-UP, the youngest entrepreneur in the styling and Salon industry.

The colours and the styling of the hair – strung together by the theme of the competition “dark” had to be seen to be believed as all the participants had done up their hair in a variety of ways, each more eye-catching than the other.

Jewellery Designing: Seven students representing as various colleges took part in the competition which was judged by model Mik Bagui. The rules were simple – every participant had to design a piece of jeweller on the paper provided within the given time of forty-five minutes.

Make-up: Seventeen participants took part in the competition. The theme of the competition was Coachella / Masquerade which ensured that the competitors focus on the basics, instead of getting waylaid.

The event was judged by Madhura Bagchi, who a wide range of experience in related fields and is an acknowledged expert in the art of making up herself.

Mask Designing: A total of six students participated to compete. The rules were simple – students had to use the material supplied to give free vent to their creativity and design a mask within the stipulated time. The event was judged by Roopa Kamdar.

Nail Art: “Let the nail be your canvas – let your creativity run wild”. There were ten participants.

The rules were simple – the artist member of the team was to create the most aesthetically pleasing art on the nails of the partner within a given period. The event was judged by Madhushmita Bagchi.

Phone Cover Designing: Decking up the handheld is almost de rigueur these days and the styled-up mobile is very much a part of the accessory bedecked fashionista’s ensemble. The event was judged by Madhura Bagchi.

Saree Draping: Draping a saree around a model is no big deal, unless off course one has to drape it in any unique way (other than the traditional way it is worn in these parts of the world, that too in front of a crowd and convince the judge.

Students from five colleges, along with their respective models took part in the competition. They were judged by Rupa Kamdar who a professional bridal makeup artist and hair stylist specialising in saree draping is, added an edge to the competition.

Mr. & Ms. Fashionista: Ten participants from six leading colleges of the city participated in the event, which was judged by Adnan Hasan.

First there was a ramp walk in which all the participants took part in a predetermined sequence. This was followed by the talent round involving singing, dancing, mimicry to acrobatics! Finally, the participants were called up one after the other with the judge asking them direct questions which they had to answer impromptu.

Shoe Designing: Calling the event shoe designing would be a kind of a misnomer as the students were expected to use old shoes as their canvas to highlight their inventiveness and creativity. As many as ten students participated in the event, which was judged by Mik Bagui. The works of art that were turned in by the participants were of such high quality – both in terms of aesthetics and visual appeal – that the judge had a real tough time in selecting the winner.

Switch: This was one of the most interesting events as it involved a boy-girl team in which the girl was expected to wrap a saree around the boy, who was in turn, expected to put make-up on the girl’s face. The total time allotted to each team to complete their tasks was thirty minutes.

In all ten contestants representing five colleges participated in the event which was judged by Adnan Hasan.

Trash Fashion: Fashion from trash – freedom from conformity with a dash of sustainability thrown in for good measure. As a concept, one has to give it to the organisers of Fashionista who thought this one up. In fact, it calls for a three-finger salute – Reuse, Reclaim and Recycle!

The event witnessed the participation from five colleges and was judged by Rupa Kamdar.

Apart from the winners of the various competitions that were a part of Fashionista 2019, the following were sought out for special prizes:

How do you end a day that was dedicated to high fashion? One that makes parting such a sweet sorrow, without robbing it off the glimmer of the stardust.  Well, the students organising the Fashionista 2019 had a perfect answer – they bid adieu with a Masquerade Ball.

Typically, a Masquerade Ball is one where the participants are in costumes, with their faces covered in masks. But the Fashionista Masquerade Ball took the concept beyond its simple meaning to make a statement – that fashion is not restricted by the identity or the beauty of the fashionista but transcends it all.

The participants from all the colleges, organising volunteers, and students of the BESC took part in the ball, letting their hair lose and shaking it up in tune with the music that was belted out by the DJ. The intense competition that had marked the day as contestants from different colleges had vied for the top slots melted into a pot called the BESC as new friendships were forged and old ties renewed.

After all, that is what life in the BESC symbolises – imbibing of life skills while winning friends and influencing people. Success follows.

(This report has been filed by Avik Chakraborty , Shruti Saha along with camera persons Snehal Mullick, Siddhant Jha, Anshu Gupta and Swapnish Sen of the Expressions collective of the BESC.)