The Weather was Perfect. The college turf arena was barricaded with fences. Professors paced around the corridors dressed in sports jersey. Though it was a Sunday, the campus was noisy and beaming with liveliness. It isn’t difficult to figure out what’s being spoken of here. It’s none other than the most awaited tournament of the year: The Bhawanipur Premium league tournament (BPLT) for the Faculty.

Cricket is a religion in our country like ours and the BPLT has promoted team spirit and solidarity through this game over the seasons. The 16th of February 2020 witnessed nothing less than the benchmark set in the previous years.

The two teams competing were representing the Morning and the Evening department of Commerce and the participants included only faculty members. 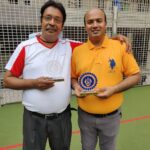 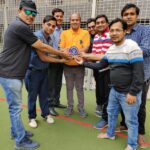 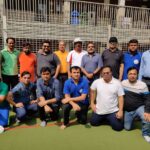 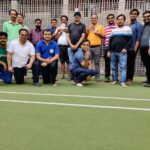 The tournament was inaugurated at 10am by Prof Dilip Shah, the Dean of student Affairs. His brief yet ‘impact fuel’ opening speech was undauntedly inspiring to all the participants.

The first of the three matches started with a bang. Prof. Saikat Nandy from the evening department scored a glorious half century. Their score was unabashedly chased by the opponent team while Prof. Chandan Jha’s quick fire was worth drawing attention to. However, they failed to reach the mark and the evening department emerged triumphant in the first match.

The tension in the final match was evident on the faces of the audience. The energy level was soaring high amidst the cheering, that kept getting louder. The game started steady. Both skippers contributed outstandingly to the game. Prof Saspo Chakroborty’s back to back sixes were loudly applauded by all while Prof. Dr. Divyesh Shah’s “Thala” captaincy and his tactful decisions on field paid off sufficiently well.

The series ended with the morning department emerging as the formidable side with a 2-1 undisputed win. Their victory was celebrated with loud music as Prof. Ankit Patwari broke into a dance. His outstanding bowling and consistent batting performance were a highlight of the series.

“The way we set the tone on the field was fantastic. Mohit Singh and Ankit Patwari get the credit today. The length the bowlers bowled today was noteworthy. I think the way we fielded put pressure on the batsmen to go for lofty shots and we got wickets there. Coming to the batting part, if someone blasts a good ball of the opponent team, then you must acknowledge. So congratulations to all the members of the winning team and lastly, Cricket is the winner'” quoted Prof. Dr. Divyesh Shah, skipper of the winning team.

A special mention must also be made of the umpire for all three matches, Rupesh sir, whose judgement in critical moments were fair and irrefutable.

No doubt BESC has always put a foot forward to break the monotony in life and include faculty members in recreational activities which bring out the best in them. Evidently, BPLT is one such event that has been successful in achieving this goal by keeping sportsmanship at the forefront.