September 23rd to 25th, 2019, Jubilee Hall. Nothing represents the very essence of the Bhawanipur Education Society College (BESC) the way Dhamaal does. It is the annual event, the harbinger of the season of festivities in Bengal with Durga Puja as its crown jewel. It is also symbolic of the Gujrati community’s synthesis – its ability to merge the community celebration of Ambe Ma when Garba is danced for nine consecutive nights with Durga Puja to give rise to a celebration that has very few parallels in the country, least of all in the campus circuit. 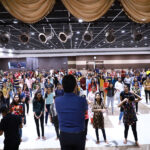 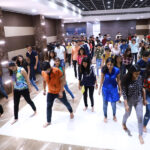 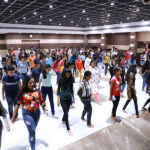 As is the practise in the Bhawanipur Education Society College (BESC), Dhamaal transcends everything divisive including caste, creed, religion or sex and is open to all students of the Institution. As a matter of fact, nine out of ten students participating in Dhamaal are non-Gujratis and keeping their needs in mind, the BESC organises a number ofGarba workshops where the intricacies of the dance and its moves are taught to the participants.

Dharmesh Bhimani an exponent of the Dance form makes it a point to leave everything behind, wherever he may be, to attend the BESC to conduct these sessions, which he has been doing for half a decade now. “I have, in my long career as a Garba dancer, never witnessed the kind of energy and zest with which the BESC students approach the sessions” he said, adding “and this I say after having done such programmes in almost all parts of the country and abroad”.

There were a hundred and fifty participants who took part in the three-day workshop. Such was the enthusiasm, that those students who could not be accommodated in the workshop were seen to be learning the moves in the different nooks and corners of the campus from the lucky ones who had secured their berths.

The workshop in itself was fun. Students swayed to the beats, sweated it out and generally enjoyed the sessions to the hilt.

The takeaway from the workshop? “Dhamaal, here we come” cheered the students in unison.