The society hall of The Bhawanipur College witnessed all together a different sort of a programme. ‘’An interactive session with Mr. Dnyaneshwar M Mulay, the secretary of the ministry of external affairs Govt. of India was conducted.’’

At 10:15 the college emits a crowd of 60 to 65 students. Bushra Hassan gave a brief power point based introduction to the regional passport officer and Mr. Mulay. At the very outset Mr. Mulay spoke to the students in an interactive conversation about his own childhood and how he overcame the short comings then and how he completed his graduation. He said that his education has been in Marathi which helped him to realise the importance of his own mother tongue. He encouraged the students to think about our own Indian languages highly, and not to feel inferior to English language as a superior lingo. He also went on to speak about the challenges that the people had to face were procuring of the passports. Then he updated the students about the radical changes to ease the situation. Earlier Mr. Soumen Chaterjee presented a power point; he spoke to the students to avail the passport facilities which are now made available by the Government of India. The session was then followed by questions and answers, in which Mr. Mulay interacted on a one to one basis. Mr. Bibhuti Bushakumar RPO and various other faculties from the college were also present on the occasion.

The entire session ended with Prof. Minakshi Chaturvedi offering our college memento to the distinguished guests. The meeting got dispersed around 11:30, with brief round of refreshments. The event was coordinated by Shivam Gupta and Bushra Hassan. 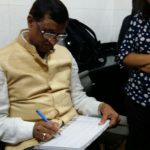 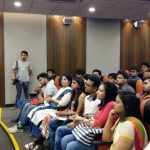