The Annual Convocation of the Bhawanipur Education Society College (BESC) was held with full solemnity on October 4th, 2018. Three hundred and twenty-nine students earned their stripes at the ceremony which was graced by the Chief of Staff, eastern Command, Lieutenant General Sunil Srivastava.

The BESC, since its very inception has charted its own path in its continuing quest for excellence, creating in the process a distinct niche for itself in the Nation’s academic consciousness. The Convocation too was no different and began with the rendering of the “Vaishnava Jana to” a bhajan written by the poet Narsinh Mehta in the 15th century and immortalised by being included in Gandhiji’s daily prayers – a melody that set the tune for the events that followed, just the way its underlying message is sought to be inculcated in the hearts and minds of the students. 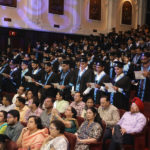 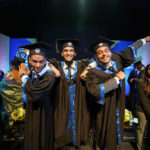 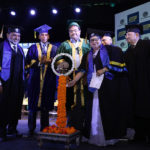 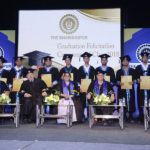 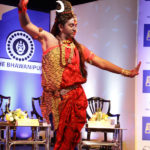 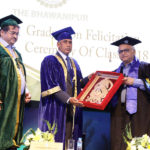 “The Convocation Ceremony is a high point in the academic calendar of the BESC” explained Miraj D. Shah, Vice Chairman of the Institution. “For us, it is much more than an occasion to hand over the certificates – it is also about setting high water marks of academic excellence that establishes the challenge for us to better in the immediately following year. In a way, it is an occasion where we rededicate ourselves and refocus our efforts on our unending quest – the search for excellence”.

“The Bhawanipur Felicitation Ceremony reminded me of everyone who had touched my life. It’s been a journey of late nights, long mornings and words could never convey how generous I felt seeing my professors and batch-mates in the audience blessing me with their love” said Nishi Agarwal.

The programme ended with the customary throwing of the Oxford Cap – symbol of graduation across campuses around the world – in unison, a symbol of BESC’s journey to its rightful place among the stars.